Beauty has no blueprint and photographer Ayla Reyes sought that in her college thesis that went viral on Facebook for challenging convention.

Reyes, a graduate of the University of Sto. Tomas (UST) Fine Arts program, shared her thesis with recreations of classics like the Mona Lisa and the Venus de Milo, earning almost 28,000 shares in five days.

“ANOMALI”, her photo collection that bagged the outstanding thesis award, is a portmanteau of “anomaly” and “ano’ng mali” (what’s wrong?) that is meant to spark conversation on beauty standards.

“I’ve always been a lover of fine arts and art history so I picked that as a theme because its fulfilling to do a study on something close to your heart. I thought it would be a good idea to make it an advocacy as well,” she told Reportr.

For the project, Reyes met with participants, learned about their personal stories, and assigned the artwork she thought fits them best. Reyes said the participants, none of which were professional models, were moved by the strong statement and concept.

“After meeting my muses, I immediately felt that they are some the strongest people I know. I consider them inspirations because they were able to rise above their insecurities and difficulties,” she said.

Reyes featured 11 muses and artworks for her photo shoot, among them is cheerleader Olivia Garcia, who gave a modern interpretation to Edgar Degas’ Little Dancer of Fourteen Years.

“Sometimes they feel scared of me because they think I’m not normal and they think I have a disease because of my hand and when I touch them, they think that when they wake up in the morning, they’re gonna have it because I touched them and I have a disability and there’s something wrong with me and my body,” Garcia said in a feature video.

Isabela Lumba, who portrayed the modern Mona Lisa, said the project sends a message that outcasts like her can do more. “Those who are outside have the more ability to change society and that’s the beauty of it,” she said.

Sarah Pimentel, who was paired with Jean-Auguste-Dominique Ingres’ La Grande Odalisque, said it was refreshing to have the spotlight turned on the minorities.

“By doing this shoot, we could let people know that just because we’re different, doesn’t mean we’re not perfect as well. We’re all humans, just different.”

For Reyes, the most striking element that made her post go viral was seeing how people with disabilities broke the mold of what was considered beautiful.

“Other than feeling empowered I think society should do their part to adjust to a more open-minded and inclusive perspective because inclusion matters!”

This story originally appeared on Reportr.World. Minor edits have been made by the Esquiremag.ph editors.

Pelosi: ‘Americans Celebrate the Beauty, Bravery and Vibrancy of Our Cherished LGBTQ Communities’

(CNSNews.com) – House Speaker Nancy Pelosi (D.-Calif.) put out a statement on Tuesday—the beginning of LGBTQ Pride Month—to express her commitment to serving the LGBTQ community in the United States.

“Every June, Americans celebrate the beauty, bravery and vibrancy of our cherished LGBTQ communities and commemorate the remarkable progress our nation has made toward full equality,” Pelosi said.

“Tragically, hatred and bigotry still linger today: an alarming wave of anti-LGBTQ legislation is sweeping statehouses across the nation, while transgender women of color are suffering rising violence in our communities,” said Pelosi.

“As these dark forces threaten to erode our hard-won progress, we cannot relent until our LGBTQ friends, family and neighbors can live with safety, dignity and pride,” she said.

“‘Every June, Americans celebrate the beauty, bravery and vibrancy of our cherished LGBTQ communities and commemorate the remarkable progress our nation has made toward full equality.  Just five decades ago, proud activists at the Stonewall Inn boldly rejected centuries of hatred and persecution in a moment that changed America and, indeed, the world.  During Pride Month, we carry on what began in the streets of New York City, proudly marching to demand an end to bigotry and to advance the cause of justice.

“‘Our nation has taken important strides toward full equality, thanks to generations of leaders and activists who rallied support for the gay community during the HIV/AIDS crisis, passed protections against discrimination and hate crimes, defeated the appalling ‘Don’t Ask, Don’t Tell’ policy, secured the right to marriage equality and more.  Tragically, hatred and bigotry still linger today: an alarming wave of anti-LGBTQ legislation is sweeping statehouses across the nation, while transgender women of color are suffering rising violence in our communities.  As these dark forces threaten to erode our hard-won progress, we cannot relent until our LGBTQ friends, family and neighbors can live with safety, dignity and pride.

“‘That is why, in February, the Democratic House once again passed the landmark Equality Act, which must become law.  The House salutes President Biden and Vice President Harris for their leadership, ensuring that LGBTQ Americans are protected against discrimination under the Civil Rights Act, ending the shameful ban on transgender service members, working to protect transgender youth and stopping anti-LGBTQ discrimination in our health care system.  This Pride Month, let us recommit ourselves to finally realizing our nation’s founding creed: that all are equal.’”

Two years after signing a licensing deal with IMG, multihyphenate entertainer and philanthropist Dolly Parton is making her first plays in beauty.

In her first bid for the beauty consumer, Parton — who has had a busy year, from funding coronavirus vaccine research to the opening of Dollywood, her theme park in Tennessee — is introducing Dolly — Scent From Above, her first fragrance line in partnership with Scent Beauty.

The fragrance line includes two eau de parfums, which will launch on HSN on July 28; a body cream; an eau de toilette, and a body mist in Walmart, Walgreens, Scent Beauty’s website and an Instagram store. Prices range from $40 to $65; industry sources think the range will surpass $40 million in sales during its first year at retail.

Fragrance made perfect sense for her first beauty product, Parton told WWD, given her own relationship with scent. “When I signed my branding deal with IMG, I thought, ‘I’m going to start with perfume.’ Everybody has always told me how good I smell,” Parton said. “I felt like a mad scientist trying to find the right combination, but we did and it took us about two years. I’m going to be doing wigs and accessories and makeup.”

Scent Beauty’s licensing deal with Parton was a coup for the company, which is optimistic about the line’s performance — and its tailored approach to distribution. “Dolly Parton is a cultural icon that’s resonating with Americans and people all over the world — she’s cross-generational,” said Steve Mormoris, chief executive officer of Scent Beauty. “Given this broad appeal and icon status, we decided to not pursue any one channel, but to have a broad-base distribution strategy from luxury channels to mass.”

HSN shared Mormoris’ enthusiasm. “As an admired musical icon and adored philanthropist with her endless contributions spanning over several decades, we are excited to add Dolly’s fragrance to our portfolio and share her inspirational story with our customers,” Bridget Love, general merchandising manager, vice president of beauty merchandising, QVC and HSN, said in an email.

Mormoris added that Scent is eyeing other categories, such as hair mists and home fragrances, for expansion, and will be sold internationally as well.

Parton has more products in mind, too. “I’m going to be doing wigs, and accessories and makeup,” she said. “I’m going to hopefully create a scent for the men in my life, too. Although Dolly — Scent from Above smells so good, I think the boys will want to wear it.”

Although Parton and Scent Beauty are casting a wide net with the distribution strategy, Parton is still making the process her own. “I actually wrote a song for it, called Sent From Above,” Parton said. “I don’t think that Liz Taylor ever wrote songs [for her perfume].”

“I think I’ll have a fun time promoting it and enjoy getting out there and talking about it,” Parton continued. “I really want to see how people respond to it.”

She has no plans to slow down, either in or out of beauty. “I’m working on a lot of new music and some fun, exciting things at the end of the year,” she said. “I’m working on different projects, but right now I’m occupied with hawking my goods.”

FOR MORE FROM WWD.COM, SEE: 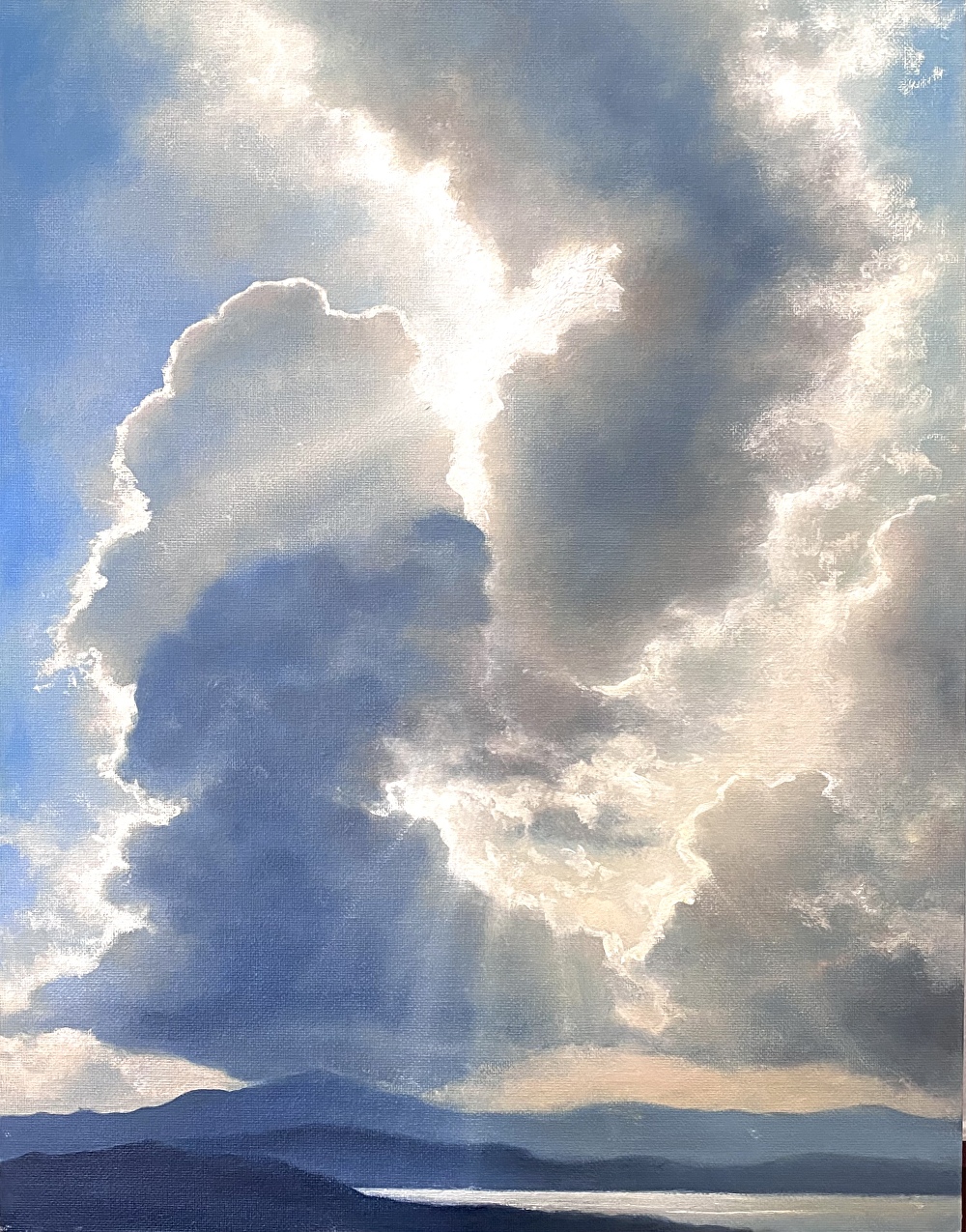 Looking at one of Ksenya Verse‘s paintings is a good reminder to look at the sky more often. The Arizona-based artist captures the nebulous forms of clouds and their numerous colors in her exquisite oil paintings.

Originally from Russia, Verse moved to Arizona at the age of 19 to “broaden her visual and cultural perspectives.” There, she fell in love with the striking landscape of the American Southwest, finding particular fascination with the uninterrupted horizons, dramatic cloud formations, and shimmering bodies of water. “My work is all about the innate connection between the external sky and our internal emotions,” she explains on her website.

Verse creates her mutable clouds by layering different colors in soft, rounded shapes, and by emphasizes light and shadow. This connection to the sun and how it affects the appearance of the clouds is what brings the amorphous shapes to life. In addition, the artist uses composition to accentuate the size of her cloud formations by taking up most of the space with the sky and leaving the landscape as a thin strip at the bottom of the panel.

You can purchase original artwork via Verse’s website, and learn more about her painting process by following the artist on Instagram. 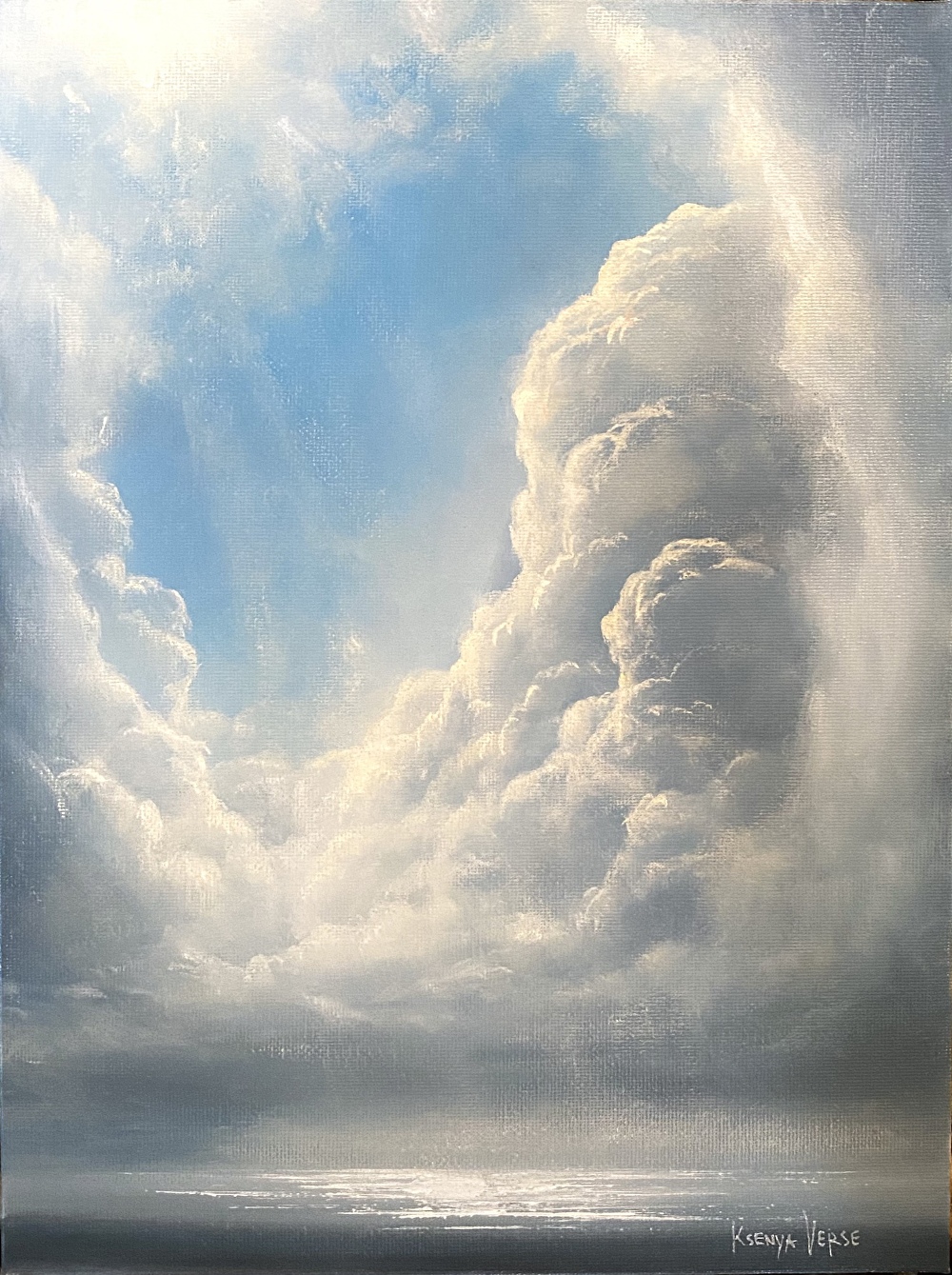 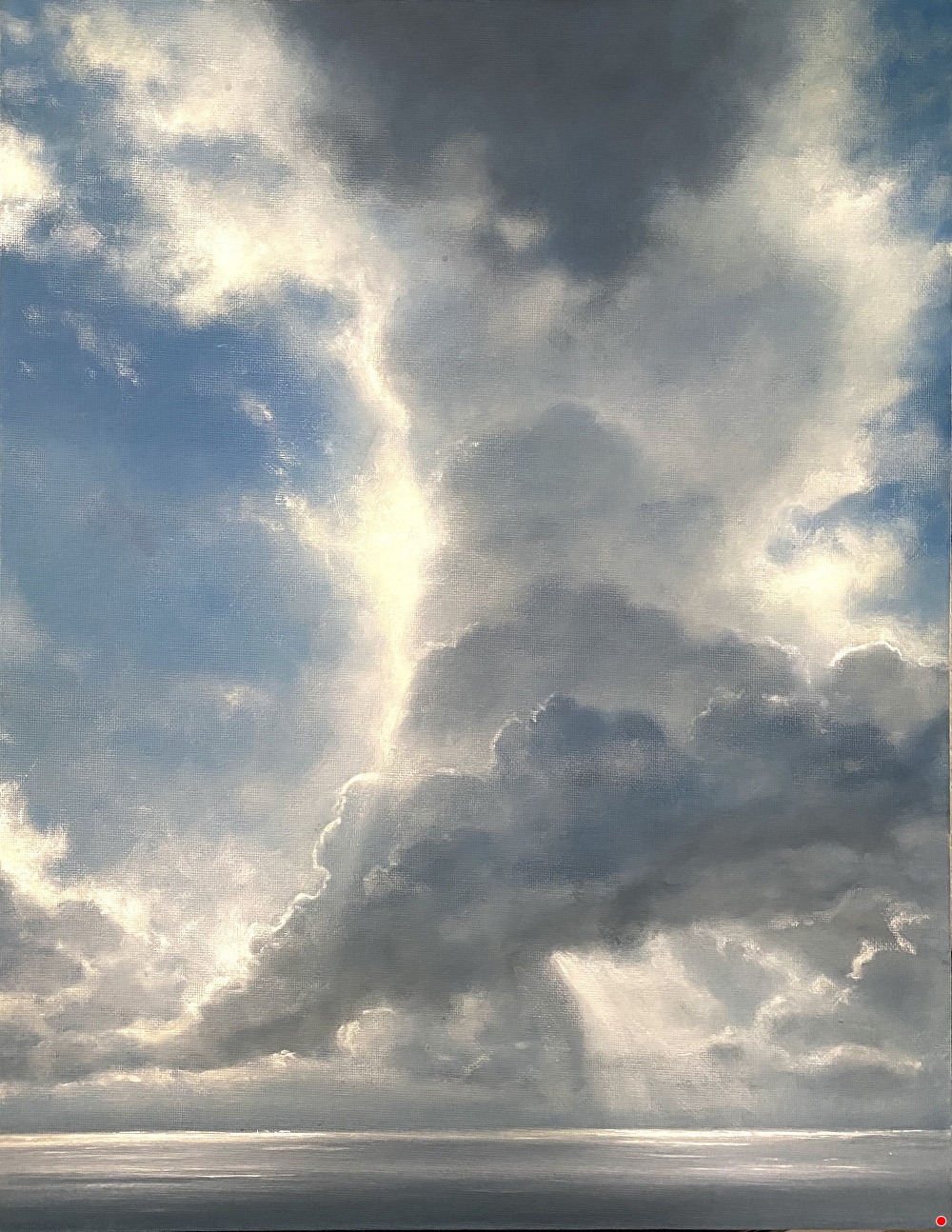 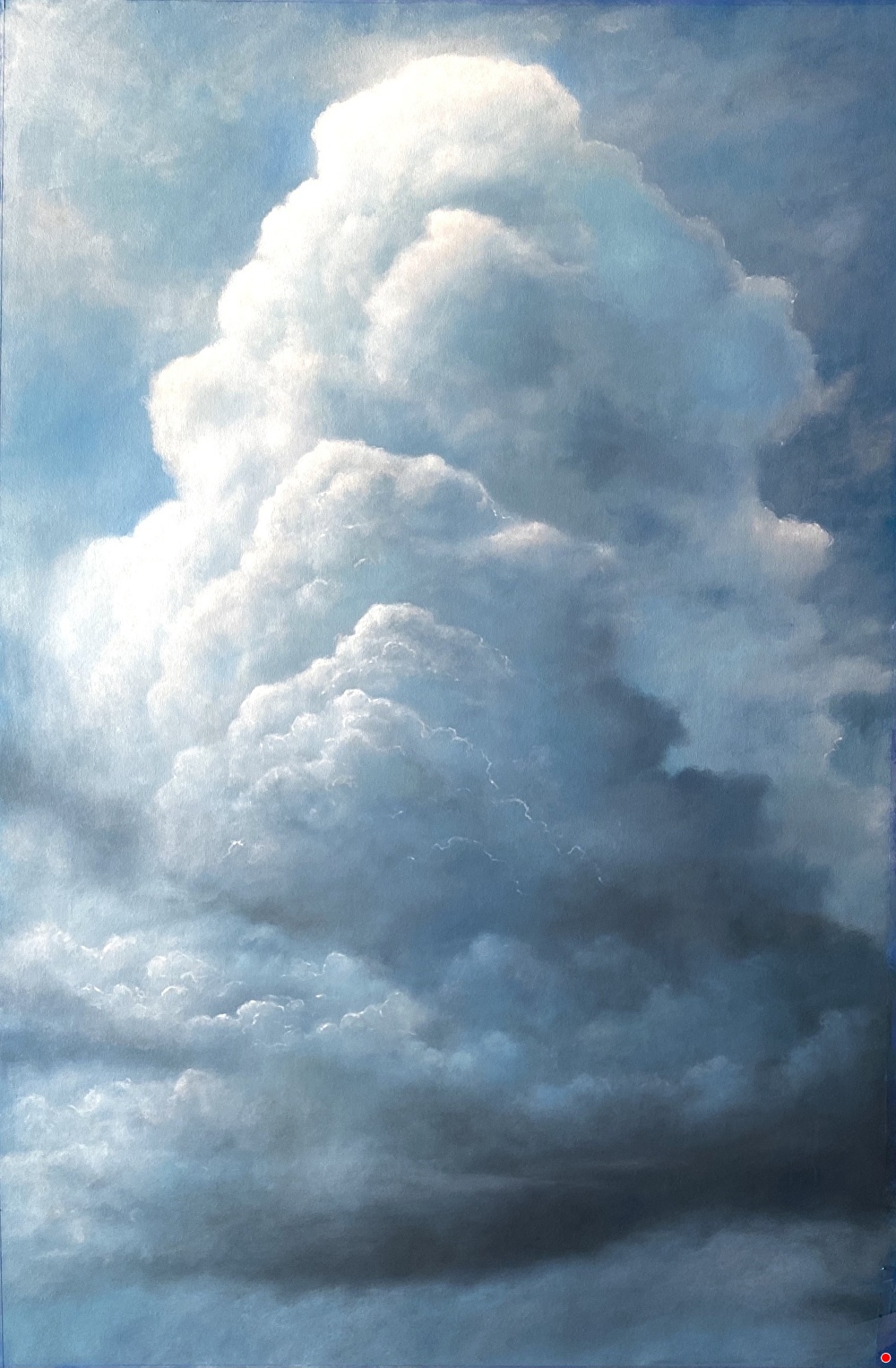 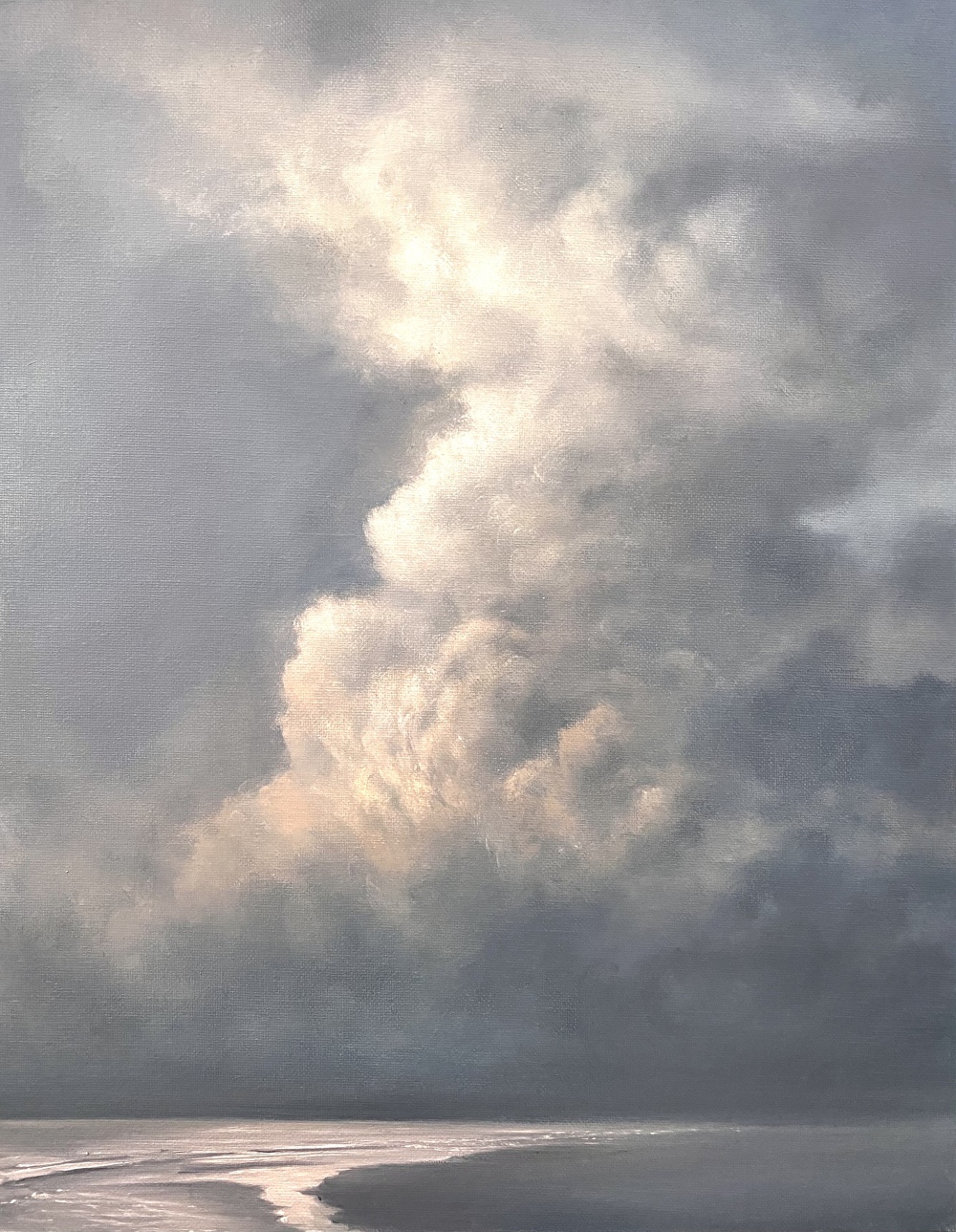 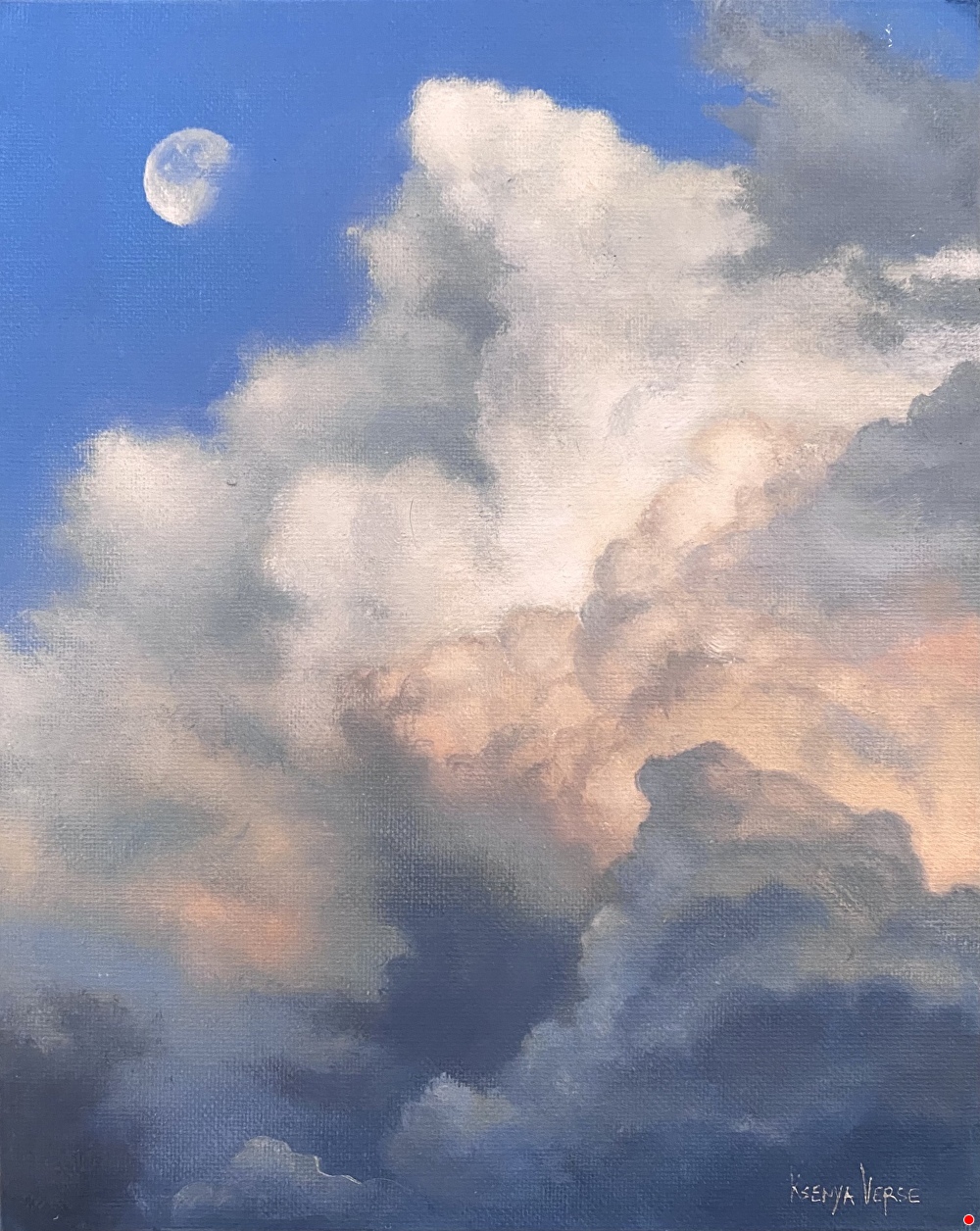 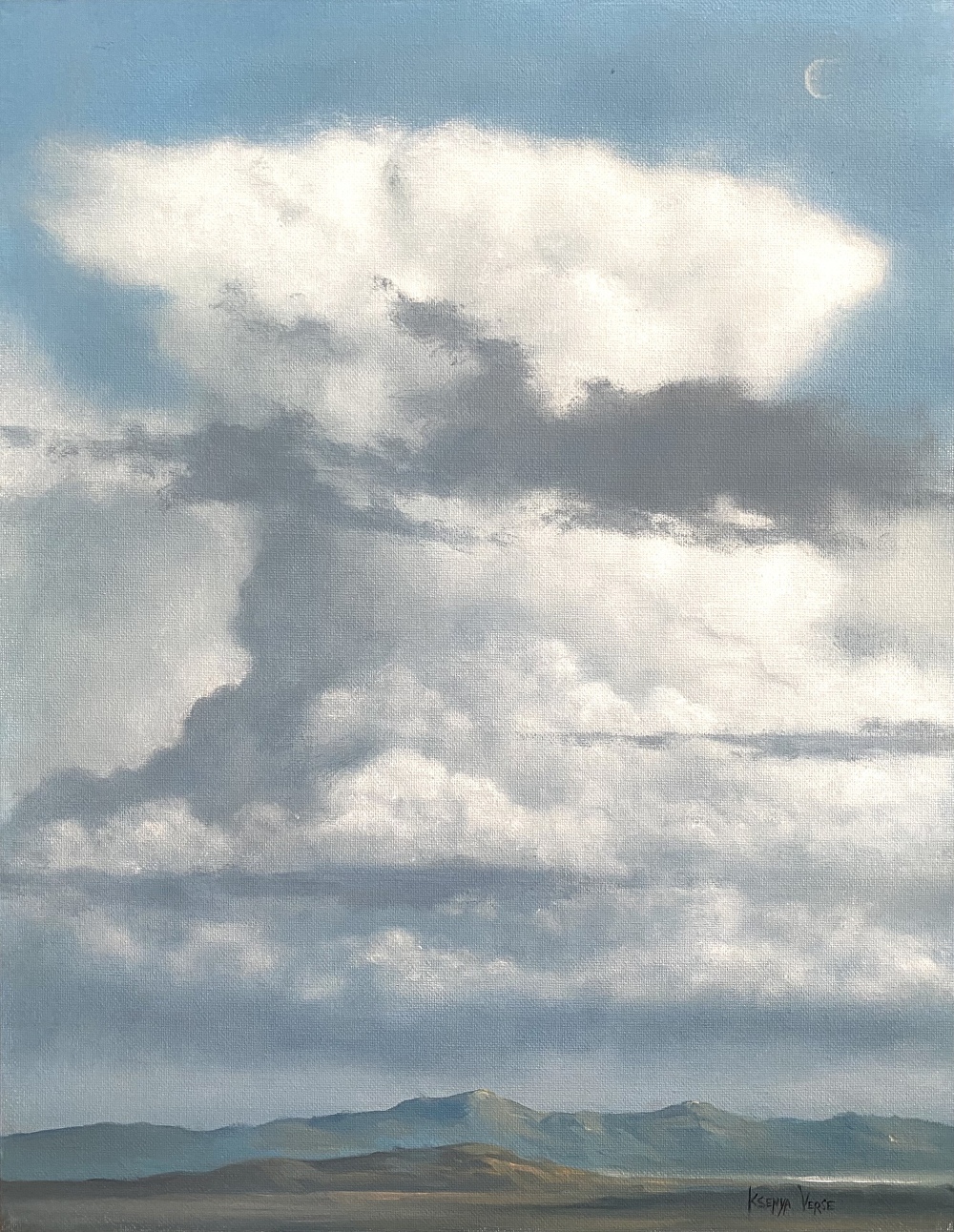 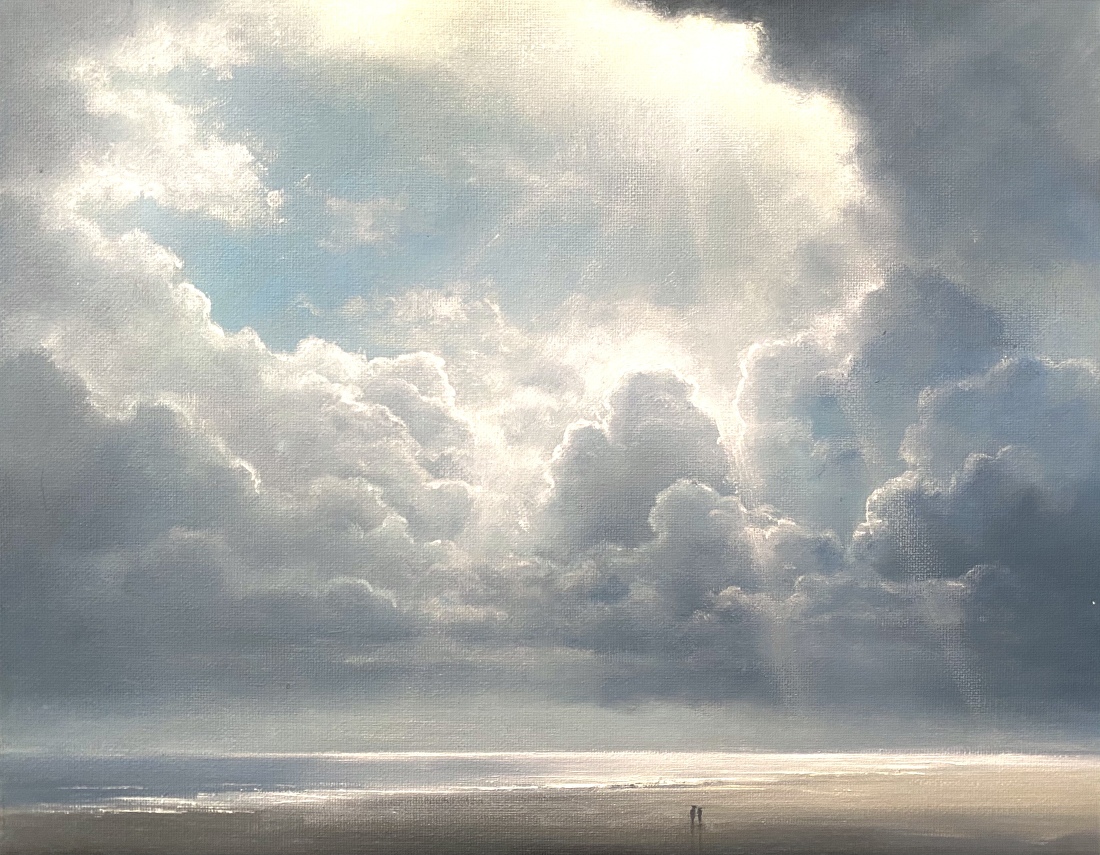 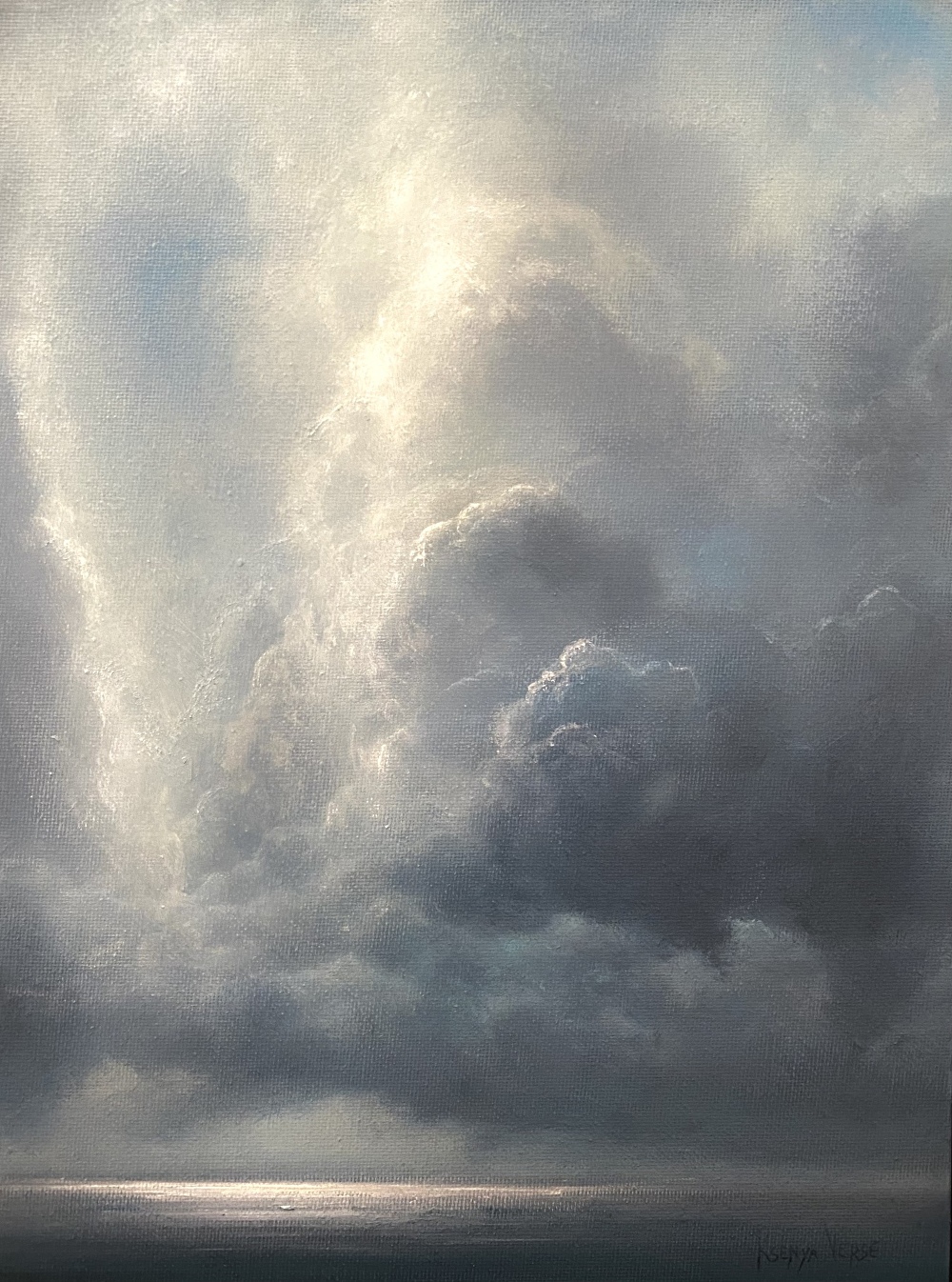 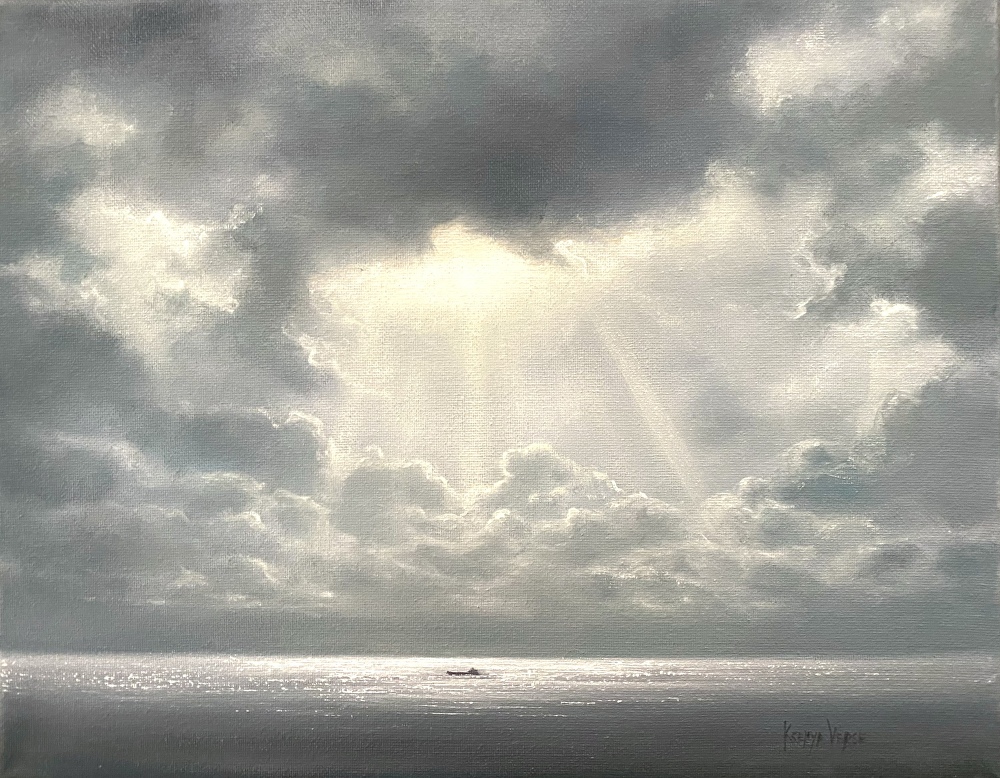 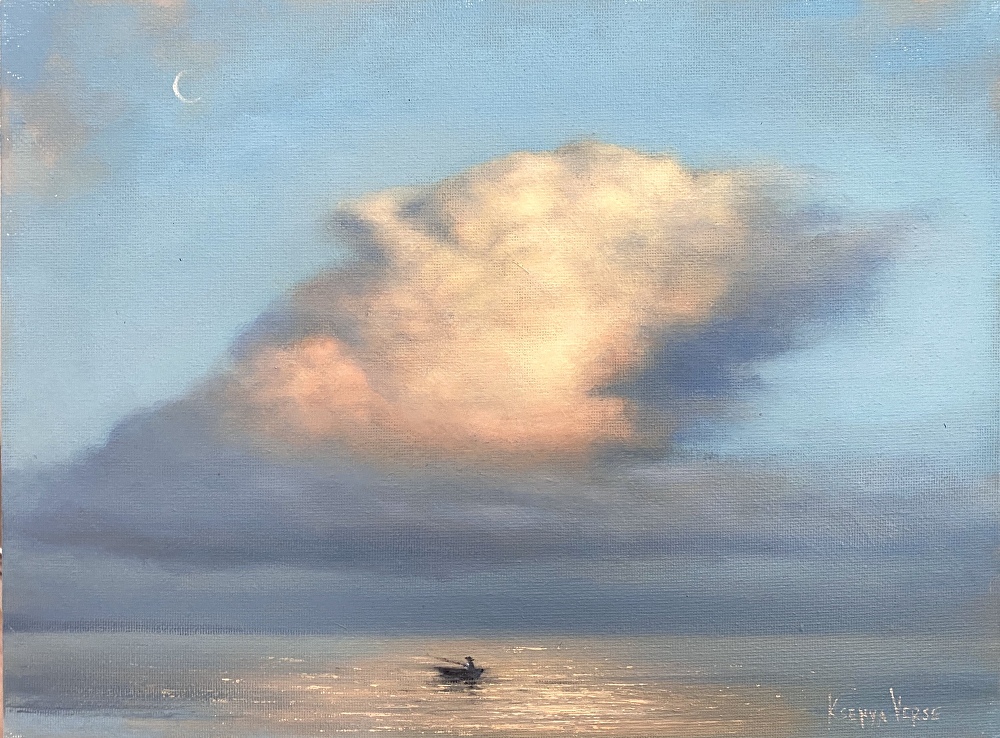 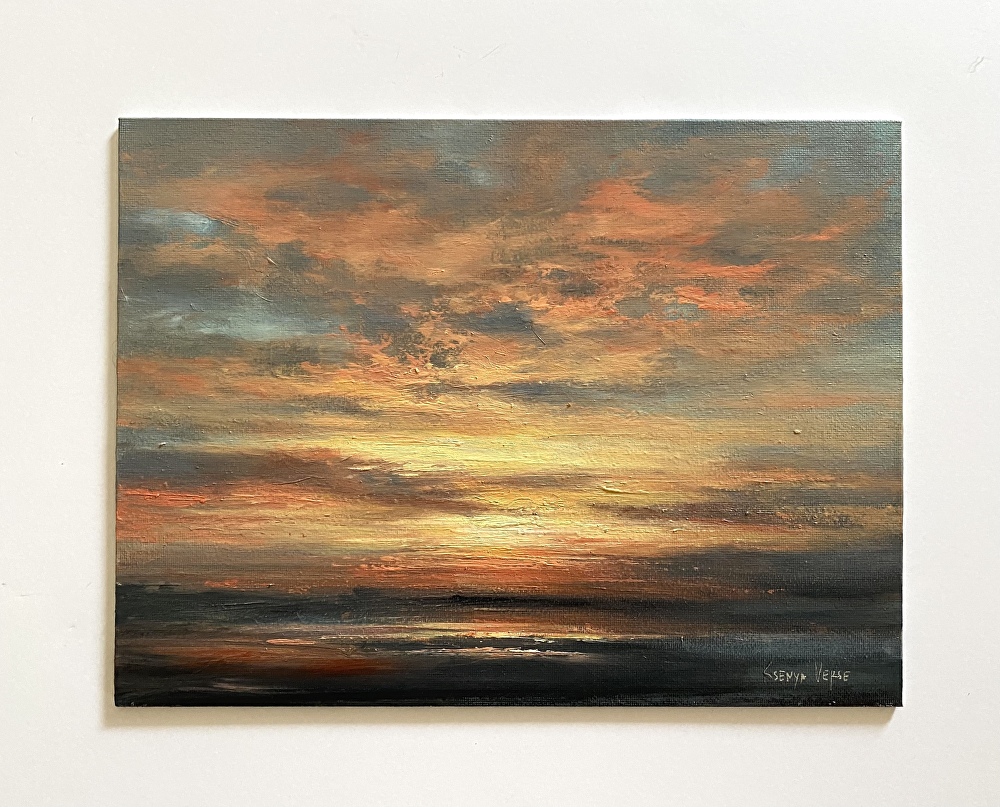 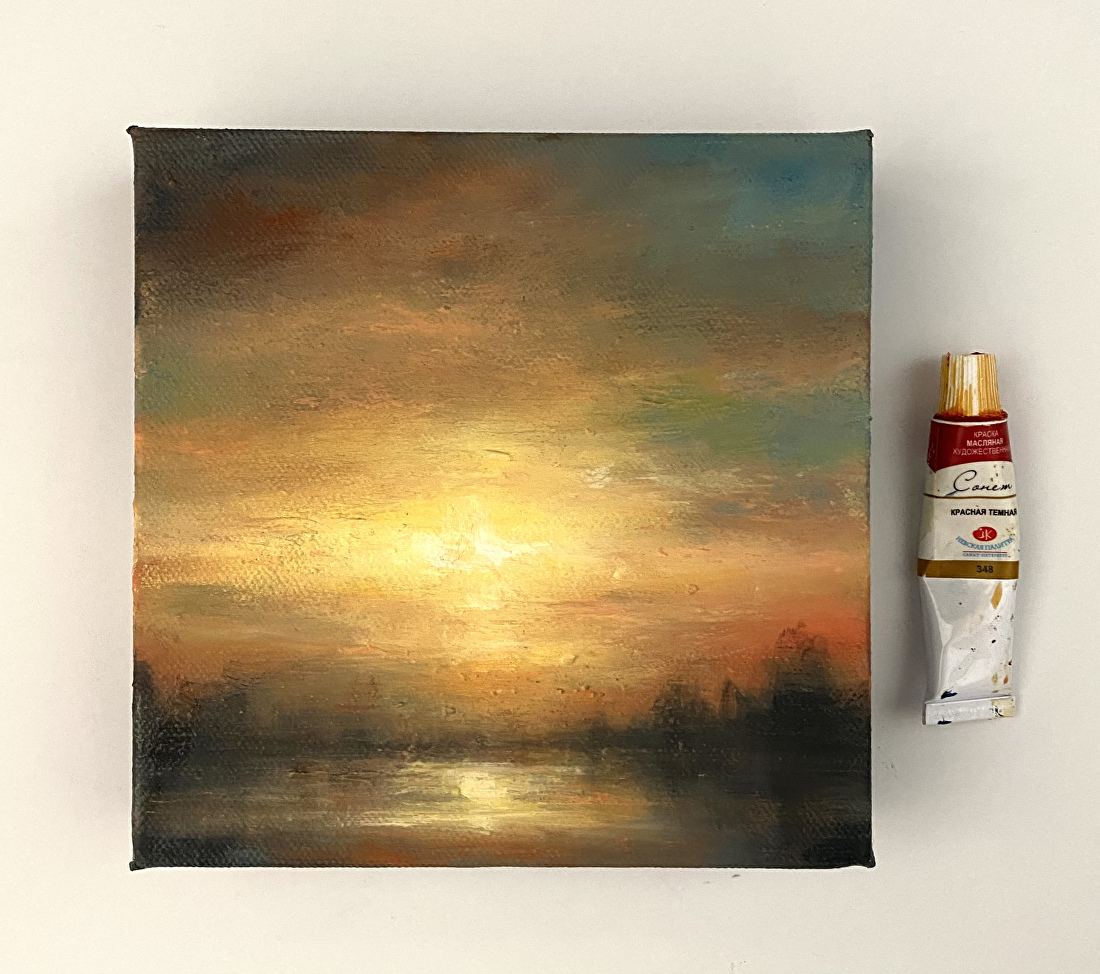 Watch these videos for more insight into Verse’s creative process: